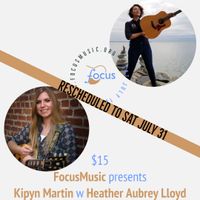 A fantabulous update! Kipyn and Heather have used the reschedule to arrange to get TOGETHER! Yep - they're going to be webcasting from the SAME PLACE allowing for them to actually play together, sing together, and generally actually... BE together! So it sounds like delaying has... beyond a SILVER lining... kind of a brilliant gold and diamond lining with a nice plush cover to keep it shiny!

Kipyn Martin is an emerging Indie Folk singer-songwriter whose roots sink deep into the banks of the Shenandoah River. She currently plays festivals, concert halls, coffeehouses, and house concerts from New England to Texas.

Kipyn celebrated several milestones in January 2017 including the release of Dance Across the Sky, a solo project following up her debut Undercover Muse, and winning the coveted Gold Award in the Mid-Atlantic Song Contest (Open category) for God is Love, her third MASC Gold adding to previous wins in 2013 and 2014.

Additional accolades for Kipyn include being honored by the Washington Area Music Association with their WAMMIE Award for New Artist of the Year in 2015 and multiple nominations the following year for Songwriter of the Year and Folk Contemporary Vocalist.

With its inventive arrangements and delightfully bizarre percussion (yes, that really is recorded bubble wrap), “Mess” received the Director's Award for Album of the Year from the Mid-Atlantic Song Contest, and the awards haven't stopped since: 2018 No Depression Magazine Songwriting Award Finalist, 2018 Falcon Ridge Folk Festival MOST WANTED Artist, 2018 National Women's Music Festival Emerging Artist, 2017 Telluride Troubadour Top 4. She is also the reigning Grand Prize winner of the prestigious Bernard Ebb Songwriting Award. While the current socially distanced climate has cancelled most of her live shows, Lloyd is planning to release new music in 2021, featuring songs about mental health, the plight of refugees, and aging gracefully.